For a tutorial on speedrunning this star, see the RTA Guide 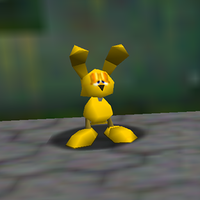 MIPS the Rabbit from Super Mario 64

MIPS is a yellow rabbit found in the Castle Basement. He appears when Mario exits a course after collecting 15 stars or 50 stars. MIPS will run away if Mario tries to go near him, but if Mario manages to grab him MIPS will give Mario a star. 2 stars can be obtained from MIPS. MIPS was used extensively in early Nintendo 64 test simulations[citation needed]. Mario was originally going to be able to throw MIPS, but this was removed[1].

In speedrunning (16 Star), the trick called MIPS Clip is used to bypass the 30 Star Door that leads to Dire, Dire Docks and Bowser in the Fire Sea.