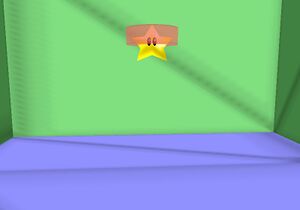 Hitbox of a Power Star

A hitbox is an invisible shape commonly used in video games for real-time collision detection. It is often a rectangle or circle (in 2D games) or cuboid, cylinder, or sphere (in 3D) that is attached to and follows a point on an object. They are used for collision detection.

If you typed Hurtbox, you may be looking for the interaction type called Hurtbox 1 or Hurtbox 2.

Hurtboxes are a specific type of hitbox that hurt Mario when he touches them. Many different enemies in the game have hurtboxes.

Note that lava is a floor with a special property, not a hurtbox.

Because hurtboxes provide an easy way to damage Mario, they create an easy way to utilize Pause Buffered Hitstun. The hurtbox of fire also gives a small vertical boost, which is useful in the A Button Challenge.

Many hitboxes push Mario away, such as those of Bob-ombs and Chuckyas. These are necessary for Quick Release and are also the basis for the Bloated Bob-omb and Handsfree Teleported Bob-omb glitches, which work because the Bob-omb's size is large enough that its hitbox pushes Mario back, but it moves with him because he's holding it.

Cloned objects that Mario can pick up normally act normal when set down, and have normal hitboxes. However, clones of objects never meant to be held have odd hitboxes. The majority of them can be interacted with only once by Mario, if at all. Platforms are intangible, and most enemies can injure Mario once and then become intangible. Coins can only be collected once, but don't disappear. Shells and Bullies are exceptions to this rule, as they can be interacted with multiple times.

Clone hitboxes overshadow the hitboxes of other clones of the same type. For example, Mario can release a fire clone and will immediately get burned by it. Then, he can stand in its (now dormant) hitbox to release another without getting burned. This serves many purposes in the A Button Challenge, including Bowser in the Sky and Tick Tock Clock.