Bowser Keys or Keys are items used to progress through key doors that are obtained by defeating Bowser at the end of a Bowser Stage. There are two keys in Super Mario 64, one from Bowser in the Dark World, which unlocks the basement, and one from Bowser in the Fire Sea, which unlocks the second floor. The only way to skip a key is to do Moat Door Skip to go into the basement without ever having to interact with the basement key door. There is no way to skip the upstairs key door since it triggers the loading zone to the second floor, with no different entrances to get in (e.g., moat door). Because of this, Bowser in the Fire Sea is mandatory to finish the game.

When the key spawns, its Y-velocity is set to 70. Sparkles are spawned and the key is set to interact with walls and floors. When the key hits the ground, it plays a sound. When the key hits the ground and has stopped bouncing, the key’s action is incremented by 1. Once this occurs, the key is able to be picked up by Mario. When the key rotates, its facing angle is increased by its angular velocity each frame. If this angular velocity exceeds 5.625 degrees/frame, it is decreased by a value of 1.40625 degrees/frame every frame. Thus, the key rotates quickly when it first spawns and its rotation slows down. 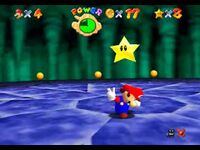 Mario with his head pointing down and star over his head after picking up a key on the Japanese version.
Retrieved from "https://ukikipedia.net/mediawiki/index.php?title=Bowser_key&oldid=14450"
Categories: