Chain Chomp is an enemy that appears only in Bob-omb Battlefield. He is chained to a wooden post, and he lunges at Mario when he is nearby.

If Mario ground pounds on the post 3 times to put it into the ground, Chain Chomp gets freed. A cutscene plays where Chain Chomps jumps 4 times, smashes the gate covering the star, and jumps off into the distance.

On the original Japanese version of the game, Chain Chomp makes a different noise when he attacks. The sound used in international versions of the game is changed to be more aggressive.

The exact cause is not known, but sometimes during Chain Chomp's cutscene he will fall off past the fence, which causes his cutscene to glitch. 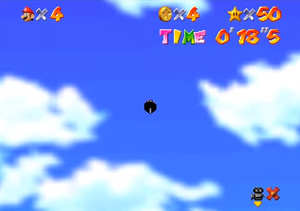 Chain Chomp flying into the air after touching a bob-omb during his cutscene.

When Chain Chomp touches a Bob-omb or a Cork Box, he will fly into the air. Usually his chain keeps him from going very high, but if he touches a cork box or bob-omb during his cutscene, there is nothing to stop him and he flies very high into the air before landing again. After landing, he resumes his cutscene as normal.

If Chain Chomp touches a thrown cork box during his cutscene, after he flies into the air and lands again, he will not resume his cutscene, resulting in a softlock.

Out of Bounds Softlock

Chain Chomp has no collision with walls, so by moving him near a wall with a pivot clone he can easily become out of bounds. If his cutscene is activated by grounding his post, he will fall underneath the course until he reaches the default water at Y -11,000. Then he will stay at the surface of the water and not move. Since he never finishes his cutscene, this results in a softlock.

Chain Chomp's cutscene can conflict with other cutscenes, resulting in unintended results.

The same thing happens by starting the race with Koopa the Quick at the same time as releasing Chain Chomp, except Chain Chomp disappears and consequently the camera does not become fixed on him.