Mario Wings to the Sky

Mario Wings to the Sky is the fifth mission of Bob-omb Battlefield. To complete the objective and spawn the star, Mario must fly through five rings of coins and collect the secrets, located in each ring's center.

This star is notorious for its difficulty when it comes to the A Button Challenge and CCC challenge. This is due to secrets being located very high in the air, which makes the cannon and the wing cap seem mandatory, as well as being inside coins, making coins also seem mandatory. Nonetheless, methods have been found to complete these challenges, albeit with extreme difficulty even with TAS methods.

Below is a history of the WR TAS for MWttS. The current state is thought to be nearly maxed, with dar gos and Plush having saved many frames over 2012's 120 TAS.

Hitboxes of the secret and the center coin only 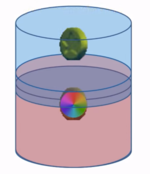 With Hitbox of the top coin overlapped

There are 5 secrets, which are regions that Mario must pass through in order to spawn the star. Each secret as an origin point with a hitbox of 137 units, cylindrically extending upwards by 100 units and downwards by 160 units.[25] All secrets have a coin overlapped onto it with the same cylindrical hitbox of a radius of 137, but only extending 64 units up and 160 units down. Additionally, a ring of 8 coins is present vertically encircling the secret.

Gathering all secrets present a huge problem in the A Button Challenge as the secrets are located way above the ground, with the 5th secret being more than 5000 units high from the origin of the course. In Coinless challenges, the difference in hitbox means that the secret can be triggered without collecting the coin by accessing the upper 32-unit region, but unfortunately, the top coin of the ring (located at 200 units above the secret) overlaps the region completely. For both challenges, extreme techniques are employed to complete the herculean task.

Previously, on August 31, 2013, pannenkoek2012 collected the star with 1 A Press, which was used to launch from the cannon with a wing cap to collect the secrets in the traditional way. At the time, it was believed that constructing a goomba bridge by cloning is impossible, as the game has a limited number of object slots that can be used, and techniques of making more efficient goomba structures were not discovered yet. The method to create a goomba bridge that requires the least number of goomba clones at the time requires an exponential number of clones.

It was known that the Hat in Hand can release an object remotely at the HOLP (held object's last position) because the HOLP does not update when Mario has a hat in hand. 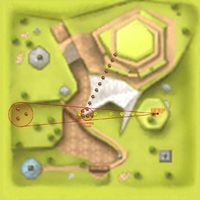 With the introduction of Goomba clusters and Goomba oases, the required number of goombas quickly dropped down from exponential to quadratic, leading pannekoek2012 to develop a strategy to collect all secrets. Goomba clusters are created by releasing a group of goombas using the same HOLP but from different angles, allowing multiple goombas to stack at the same location. However, due to overlapping hitboxes of these goomba clones, each goomba only has a thin region where it can be interacted with, so Mario needs to be maneuvered very carefully. The goomba oasis is created by using transport cloning, which occurs when the object is being pushed by an enemy, and releases the clone at the midpoint between its position and the HOLP, but at the HOLP's height, allowing a massive number of goombas occupying the oasis and bridging between the fourth and fifth secrets.

The TAS run was completed on May 29, 2015. It took 55 hours to create, with 2 years of planning, resulting in a run that takes 56 minutes to finish. The HOLP takes 28 goombas to reach, the oasis consists of 7 goombas, and the final goomba staircase takes 36 goombas to bridge up the oasis, totaling 71 goombas to complete the mission.

Setting up the HOLP

In order to create a goomba oasis at the ideal location, a specific HOLP needs to be achieved beforehand. Precisely, the HOLP is set at (x, y, z) = (3592, 5170, -42). In the single-star basis, the HOLP can be achieved by building a goomba staircase consisting of 28 Goombas. The process would take 22 minutes to complete[26].

However, in a full game run of 120 stars, setting up the HOLP can be done much faster by using the HOLP set from Bowser in the Sky (BitS). Therefore, in the full ABC run, Mario will first set up a specific HOLP from Bowser in the Fire Sea using techniques such as cloning, bob-omb's backward momentum, and pause buffer hitstun, in order to get to the top of BitS quickly for setting up the HOLP at (3558, 5167, -166) for Mario Wings to the Sky. The setup takes 6 and a half minutes to complete[26]. While the HOLP is slightly off by 130 units from the target, it only affects the locations used when transport cloning and does not affect the strategy.

For the first, second, and third secrets, Mario uses Backward Shell Hyperspeed in order to build up high negative speed to launch off from the mountain, allowing the lower three secrets in the air to be collected. 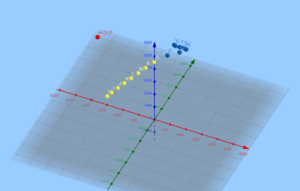 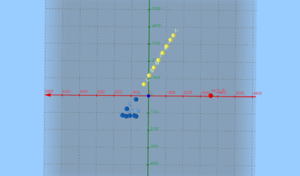 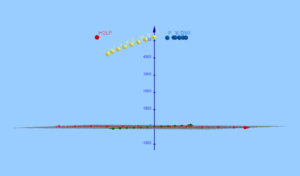 During the construction to set up the HOLP, Mario takes heavy fall damage on his way down to the ground below. Fortunately, the spinning heart on his way up the mountain provides him with a way to refill his HP multiple times.

In the ABC run of this star, the goombas in the oasis created by transport cloning are in the following positions[27] according to Pannenkoek: 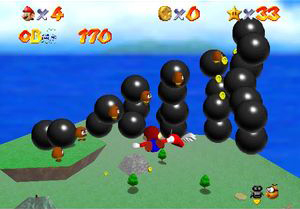 The "bowling ball centipedes" created to collect the 5 secrets coinless.

On November 24, 2013, Pannenkoek completed Mario Wings to the Sky coinless. The run was done before he completed the mission without A presses. The TAS run was 73 minutes long.

Pannenkoek made use of premature clones, which are cloned objects that do not have some of their properties fully loaded. Using this exploit, all five secrets could be collected coinless by cloning away the top ring of coins prematurely. For the first 3 secrets, Mario brought a cork box to the island hands-free with the wing cap, waited for a while to grab the fake cork box right as it unloads, and then released a clone of the top coin immediately as it loads. Once the top coin was out of the way, Mario flew to the secret without touching the other coins.

More complicated strategies were required to reach the fourth secret[28]. Mario began by setting the HOLP somewhere in the air and putting a clone of an object with a hurt hitbox, such as a bowling ball. To do so, Mario flew to the flagpole with hat-in-hand glitch and dropped a bowling ball clone by releasing it at the flagpole (spawning it at the flagpole's height but at the HOLP laterally). Then, Mario flew towards the fourth secret with a clone, got hurt by the bowling ball, and removed the top coin by premature cloning while falling through the secret's hitbox. Because Mario was hatless, Pannenkoek held the A button during the descent to prevent fall damage killing Mario.

The last secret was extremely difficult to get, as the location was too high to release clones, and the ring was too high to reach from the ground (using a cannon will drop the object, and the location had to be reached holding hands free with a clone). Pannenkoek constructed "bowling ball centipedes" by first creating a bowling ball clone as high as he could, then set up the HOLP via a cannon shot with a wing cap, and finally dove on a bob-omb right as he got hurt with a bowling ball to set an even higher HOLP for a Goomba clone to be placed there. In the end, there were 6 tangible goomba clones and 1 bowling ball clone, where Mario would fly to the base of the structure as the wing cap ran out and bounce on the goombas to release a premature clone of the top coin, and finally collects the 5th secret while falling. To avoid taking big fall damage on the way down, a goomba clone was placed below acting as a landing pad. Mario then grabbed the star on the ground. 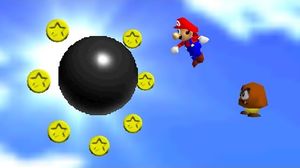 The moment Mario ascends the goomba staircase to collect the 5th secret as the bowling ball hits him.

CCC Challenge stands for Coinless, Capless, and Cannonless. The restriction of coinless was already difficult to circumvent, and at the time the coinless run was made, it was thought to be impossible. However, as more advanced techniques such as goomba clusters, pause buffered hitstun and Parallel Universes were found, Pannekoek began planning a route to get the secrets without collecting coins and without the aid of Wing Cap and cannons.

In Bob-omb Battlefield, the ring of coins surrounding the secret is only loaded one frame after Mario enters the activation radius, and not on the frame Mario activates it. Therefore, there is a one-frame window where Mario can collect the secret without touching the coins, but in order to do so, Mario needs to be move at more than 2000 speed[29], which is 10 times faster than the speed used in hyperspeed flying with wing cap in 120-Star TAS speedrun.

To execute this strategy, Pannekoek constructs a PU route. For the first secret, Mario reaches negative 1.66 million speed (3.83 million for the second secret) by pause-buffered BLJs to navigate to "midway point"[30] with an Overflow Jump (OJ), dropping down to 0.98 million speed (speed drops are done by rapidly pressing A) in order navigate up the hill[30] with another OJ, and finally dropping down to about 404 thousand speed to horizontal launch back to the main map while collecting one of the secrets. In order to have Mario stop exactly on the main map collecting the secret, the movement is set so that his final launch movement has one of its Quarter Step being out of bounds.

Mario approaches a bob-omb to get hurt by its explosion in order to use pause-buffered hitstun to throw a cloned object at the HOLP. The object is a bob-omb exploded by a nearby water bomb and turns into a bowling ball after cloning. For constructing a goomba bridge, the cap cannot be used in the challenge, so Pannenkoek resorts to pause-buffered hitstun to release clones remotely. With a bob-omb explosion clone allowing Mario to stay under hitstun indefinitely, and a goomba clone detonating oncoming bob-ombs that would remove the hurtbox of the explosion clone, Mario can begin mass-cloning goombas.

The initial Goomba Bridge takes 45 goomba clones to complete, and it is only 1 object away from a game crash due to having too many objects on the screen. Mario begins climbing the goomba staircase, releasing a premature clone to remove the top coin. The bowling clone created earlier allows Mario to immediately reverse the direction upon hitting the secret, so as to not collect the other coins.

It was only after the TAS run was completed that Pannekoek found out the distance between Cluster I and the bowling ball is closer than expected. Therefore, the run was later improved by setting the HOLP at cluster I instead, since Mario actually has enough distance to slow down on its own with 2 goomba clones placed there. This reduces the number of goomba clones to 38.

Pannenkoek later improves the strategy by collecting the 5th secret with vertical speed conservation, bringing the required time to complete the level down to only 3 minutes. This is done by storing a huge vertical speed by first accumulating massive horizontal speed and converting it using a double jump while holding a cork box clone to remove the top coin by premature cloning.

The procedure was done in the following steps: