A surface or triangle in Super Mario 64 is a piece of geometry that exerts some kind of force or effect on Mario. Every triangle falls into one of three categories: a floor triangle, a wall triangle, or a ceiling triangle. However, a triangle does not store what category it is. Instead, its category is determined based on the y component of the triangle's normal vector[1]. If y component > 0.01, then it is a floor. If y component < -0.01, then it is a ceiling. Otherwise, it is a wall. 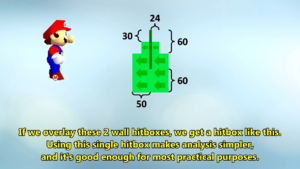 The hitbox of a wall during both the initial handle and a ground quarter step, simplified 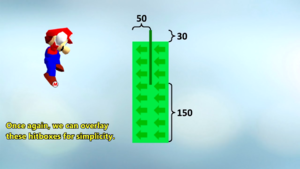 The hitbox of a wall during an air quarter step, simplified 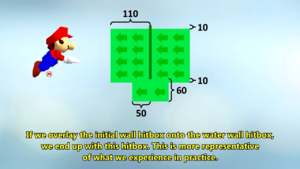 The hitbox of a wall in the water, including both the inital handle and the single frame movement, simplified 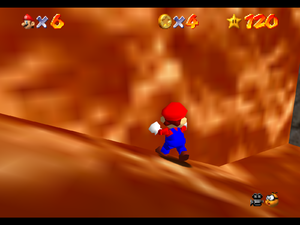 This wall in BoB is not quite vertical.

The majority of walls in the game are perfectly vertical, but not all. Walls that are not vertical are one cause of Glitchy Ledge Grabs.

A floor's hitbox extends 78 units below and 100 units above the floor triangle. This allows Mario to move vertically along floors; if he is moving up or down a slope or stairs, he will be off the floor after his horizontal motion but still in its hitbox, which will snap him to the floor. He will always be snapped up if he's in a floor's hitbox below the floor, but he'll only be snapped down while above a floor if he is in a ground movement state. When walking on a slope, Mario will move horizontally at a rate slower than his actual speed, known as his De Facto Speed.

Any location that is not inside or above a floor hitbox is considered out of bounds; Mario will not be able to move into it of his own volition, and if forced into it, he will die.

On the American release of the game, there is an interesting ceiling example found in Rainbow Ride, where the top of the chimney is not capped off, making the ceiling go up forever, softlocking Mario if he ends up sliding into it.

Even though ceilings try to push Mario outwards, they can still be accessed using various techniques, such as getting pushed by an enemy. Note that once Mario is standing inside the ceiling, he is no longer able to move anywhere due to his quarter steps being cancelled.

For Water movement, Mario instead gets warped downward by ceilings. These downwarps are used in various TASes and speedruns.