There are 62 coins in the slide, including the "secret" coin on the left corner before sliding.

This route grabs the crazy box instead of doing the sideflip to the bridge near the top of the stage. 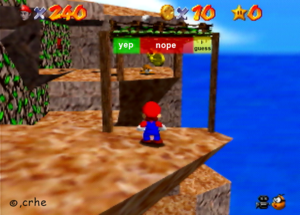 Longjump in the green part to avoid the invisible wall.

This route skips the crazy box and does a sideflip to collect the coins near the top of the stage before entering the slide.

In order to avoid the invisible wall at the edge before the star, longjump along the right side (around the corner at the edge of the fall) and after making it past edge, glide to the left and hit the star.

This route skips on the red coins before the slide, collects all the coins on the slide and ends on a red coin instead of a bob-omb.