The Nintendo 64 Console is the main platform on the official leaderboards.

This is the first Japanese release. This version has a shorter intro cutscene, less text overall, and small differences in a few stages. it is faster for 1 Star, 16 Star, and 120 Star

This is the North American release. Text boxes scroll faster and 15 star MIPS runs slower in this release. It is faster for 0 Star and 70 Star

This is the European/Australian release. It only runs at 25 fps, which makes it completely unsuitable for speedrunning.

This is the updated Japanese release that includes support for the Rumble Pak. This version has removed the ability to perform BLJs, so 0 star, 1 star and 16 star cannot be completed. It also longer loading times than NTSC-U and NTSC-J, and slightly less lag in some sections. This version is only faster in some single star records, but in a full game run it's best to be avoided.

The Nintendo 64 console often lags quite a bit while running Super Mario 64. Speedrunners use a myriad of techniques to reduce as much lag as possible while performing their movement. This mostly consists of turning the camera to face a specific way to reduce the workload of the N64 graphics processor.

You can find more information about Lag Reduction at the Usamune Project Lag Library. Lag Reduction tips are also sprinkled into the RTA Guides. 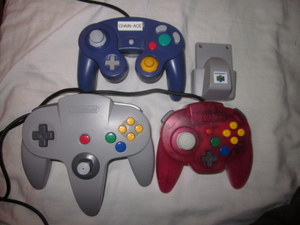 There are a variety of controllers that can be used on a Nintendo 64. Here we will list them out and briefly describe the pros and cons of each.

This is the controller that the majority of runners use. This controller was designed by Nintendo specifically for this game so you won't find anything more suitable. It has an analog stick with an octagonal gate and most setups on the RTA guide are calibrated around these angles due to the popularity of the controller.

That being said, there are some major drawbacks to using this controller, the most significant of which being the analog stick, which is notorious for wearing out extremely quickly. For this reason, runners seek out controllers with high quality sticks and attempt to keep them in as good of a condition as possible by lubricating them with synthetic silicone based lubricants (never oil based) and by using a secondary controller for throwing Bowser, as spinning the analog stick is the fastest way to wear it out. Runners will also source aftermarket solutions to make the stick more durable, commonly a steel bowl from companies like Steelsticks64 are put into the controller to prevent it from wearing out. There is a whole slew of aftermarket stick solutions out there to solve this problem and new solutions are popping up all the time. If you do have a high quality stick, you will be treated to some of the finest control of Mario that's available.

Another subjective drawback is the issue of comfort in the hands. Some people dislike the N64 controller because of its signature tri-wing design being a bit too cramped.

The Hori Minipad is a third party controller that was released exclusively in Japan in the latter part of the N64's lifecycle. It is most notable for having a Gamecube style stick which will not wear out nearly as quickly, and it only has 2 prongs which brings it closer in line with the design of modern controllers.

There are a few commonly cited drawbacks to this controller, the first of which being the stick sensitivity and angle inconsistency. It can be rather difficult to find a Minipad with a stick that has good angles for speedrunning, and getting a dud can be incredibly costly since these controllers usually sell for upwards of $80 USD. The sensitivity on the stick can also make precise adjustments more difficult than the OEM N64 Controller. The second issue is that of comfort. The Minipad, as its name implies, is incredibly compact. The layout is incredibly crowded and some people may find it uncomfortable to use for extended periods of time. Finally, the buttons on the Minipad can feel a bit unsatisfying to use. The triggers especially can feel a bit spongy with a shallow actuation distance, and the presence of two small trigger buttons in the same spot with no proper separation can be weird to new users.

Though less popular than the other two, the GameCube controller can be used on an N64 console through the use of an adapter made by Raphnet. At first glance this controller seems to be the best choice, having a very high quality stick that won't wear out which is also far more comfortable than the others. It is also easy to get your hands on a new one since Nintendo has re-released this controller for Smash 4 and Smash Ultimate.

These conveniences, however, come with some caveats. The major issue is that there are no C-Buttons, instead there is a C-Stick which maps to digital C-Button presses. This makes it quite a bit harder to operate during the run, making some advanced lag reductions more difficult to perform. This issue can be partially mitigated by double binding your C-Right and C-Left Buttons to both the C-Stick and to the X and Y buttons, which is a feature of the Raphnet adapter.

Another common gripe is that using the GameCube controller's analog L button is uncomfortable or inconsistent when mapped to the N64's Z button. This can be mitigated by ensuring that Z is bound to the digital press at the bottom of the L button and not the analog portion of the press. If you experience discomfort from pressing the analog L button all the way every time, then you can remove the spring in the trigger or use trigger plugs to reduce the actuation distance.

Finally, the stick on the GameCube controller has the same issue as the Hori Minipad, that being high sensitivity and angles that are different from the N64. This isn't necessarily a downside, as the different angles can make some strats easier and others more difficult to perform.

There are a myriad of other lower quality controllers out there for the N64. Some of these controllers are usable in certain contexts, but most of them are a complete waste of money and should be avoided at all costs. Controllers like the Retrobit Tribute64 and the Brawler64 are suitable to be used as secondary Bowser throw controllers, but it is recommended not to use them for general gameplay due to their cheaper build quality, poor stick angles and sensitivity.

Other unbranded controllers that look like N64 controllers should also be avoided as their sticks and overall build quality is incredibly poor and will not be consistent at all. This also includes controllers from the N64 era, such as the SuperPad64 or the Boomerang 64.

The N64 buying guide covers everything you need to know to get set up to play on console, including information on game versions, platforms, TVs, monitors, and peripherals like input displays, Gamesharks and Everdrives.