RTA Guide/In the Talons of the Big Bird

In the Talons of the Big Bird is the first mission of Shifting Sand Land. The 1st star must be selected when entering the stage in order to spawn this star.

Your speed is capped while you're spinning. If you land on the fly-guy while holding neutral, you'll maintain your speed until the moment you make another input. 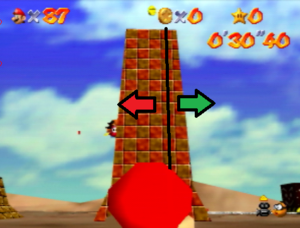 Try to run on the right side of the pillar. If you run too far left, fly-guy will move towards you and ruin the setup.

Doing two single jumps after rolling out at the bottom of the slope allows you to preserve speed on your way to the pillar. The first single jump should be frame-perfect, but if you're a couple frames late on the second jump you can still just walk up the pillar normally.

Doing two first-frame punches allows you to conserve slightly more speed than is possible with the single jumps. However, this is riskier than the doing the single jumps because failing to punch on the first frame possible will cause you to lose most or all of your speed immediately.

Ideally, doing two jumpkicks before the jumpdive on the side of pyramid is faster, but some runners will opt to do three jumpkicks instead.

This strat requires you to do a frame-perfect rollout after sliding down the slope, and then doing a frame perfect slidekick to get to the far pillar. Then, a camera setup is helpful in giving you a good angle to long jump with from the pillar that will allow you to jump-kick up the side of the pyramid and then jump-dive on to the platform. This is only recommended for top-level 16 star runners.