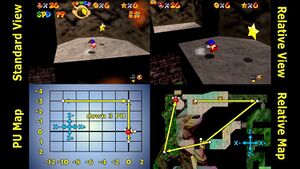 A diagram of Parallel Universe movement in Hazy Maze Cave, after Mario has returned to the main map.

A Parallel Universe, or PU, is a region of space located far outside the intended map boundaries that reflects certain aspects, especially the floors and/or ceilings, of the main map. When the game looks for floors below (or ceilings above) a given object, it first "truncates" the object's position from a floating point value to a 16-bit integer value. The range of a floating point value is much larger than the range of a 16-bit integer value (which is -215 = -32,768 to 215 - 1 = 32,767). If a coordinate of the object's position falls outside this range, it "wraps around". For example, if one of these floating point values is 40,000, then 40,000 - 65,536 = -25,536 will be used when determining if the object is aligned with a floor or ceiling. This gives the illusion that the floors and ceilings of the main level map are "copied" repeatedly in a uniform 3D grid, at a spacing of 65,536 units.

The truncation responsible for the existence of parallel universes is only performed when determining alignment with floors and ceilings. This means that walls and objects, both of which use floating point arithmetic to determine collision, do not "exist" in PUs, unless they are brought there.

Due to the extremely high speed required to travel to PUs, they are not accessible from all courses. The courses where PUs can or cannot be accessed are summarized in the tables below. Work is ongoing to try to access PUs in courses such as Bowser in the Fire Sea (via Bully battery) and demo courses (via massive Spawning displacement).

Although usually the term "PU" refers to a horizontal PU (i.e. one caused by truncation of the x and/or z coordinates of an object's position), vertical PUs (where the y coordinate is truncated) also exist. However, these behave completely differently to horizontal PUs. While truncated coordinates are used to find the floor below the object and the ceiling above the object, the original floating point values are used to determine what effect these surfaces have on the object.

For example, when Mario is less than 160 units below the nearest ceiling, he is considered to be "above" the ceiling, his vertical speed is killed, and he bonks. If Mario moves to a positive (upward) vertical PU, the "nearest" ceiling will be determined based on truncated coordinates, and will therefore be in the main map. But when checking whether he is above this ceiling, floating point coordinates are used instead, and so Mario behaves as though he is stuck in a ceiling. This behavior results in positive vertical PUs appearing to be filled entirely with ceilings.

On the other hand, when Mario is below his "nearest" floor, he will snap up to it. This means that if Mario moves to a negative vertical PU, he will usually upwarp back to the main PU grid. This is called an overflow jump, or OJ for short.

It is typically difficult to get to a vertical PU. In the positive direction, there is a ceiling at y = 20,000 that prevents upward movement. We can bypass this ceiling by pressing against OoB, for example by using hyperspeed flying. We can also use platform displacement or indefinite owl flight to reach a positive vertical PU.

In the negative direction, we can use a negative jump to jump downward with large amounts of negative speed, or platform displacement. 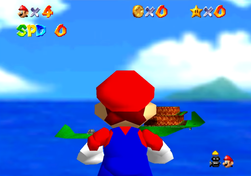 Mario looking to the original map from a PU

Mario BLJing to a PU

Parallel universes have found uses in both speed TASes and the A Button Challenge since they allow greater control of movement through a level. PU routing is comparable to movement through a five-dimensional space, as Mario can be modeled as traveling along five axes: three "relative" axes describing his position within the map, and two integers to specify which PU he is currently in. These PU axis integers are Mario's coordinates on the PU grid. Mario can adjust his speed and angle to move relatively around the stage regardless of how many PUs he moves in the x or z dimensions.

Mario's movement is split up into four quarter steps, and if any of these quarter steps attempts to place Mario out of bounds, his movement is canceled. Therefore in order to move to a PU, Mario's speed must be a multiple of four times the distance between PUs. If Mario takes all four quarter steps, then he will move four PUs in a single frame. This distance is called the Quadruple Parallel Universe, or QPU, distance.

If one of Mario's quarter steps (other than the first one) ends out of bounds, the game will cut his movement short. In this case, Mario does not travel the full QPU distance, and instead ends at whichever PU he made it to before his intended quarter step became out of bounds. He is then "QPU misaligned."

As traveling to PUs involves moving very far from the origin, floating point imprecision can begin to have a significant effect on Mario's position, angle, and collision. When Mario's position becomes large enough, this imprecision will result in the coordinates in PUs becoming so coarse that Mario cannot cross from one coordinate to the next and, eventually, will result in certain PUs being completely unaccessible.

While in theory the grid of PUs extends indefinitely, the behavior of the truncation operation becomes "undefined" when the floating point value is outside the range -231 to 231 - 1. The Nintendo 64 and iQue Player[1] versions of the game crash when such a truncation is attempted. The Wii and Wii U virtual console versions of the game do not crash, though it is not currently known whether they wrap around the 32-bit integer range, or cap to the endpoints of the range. Most emulators do not properly emulate the crash, except for a specific version of Mupen64, modded to crash correctly.

While movement to PUs at coordinates this large is rarely useful, this crash can occur due to other instances of truncation in the game, even in PUs close to the main map. For example, when determining Mario's tilt while walking, the game multiples Mario's speed by 16,384 and then truncates this value. This means that the game can crash in certain conditions when Mario has a speed of about 131,000, which is below QPU speed.

While not all conditions for these types of crashes are known, there are some that come up frequently. These are when:

Certain objects and graphics behave interestingly while in parallel universes. For example: