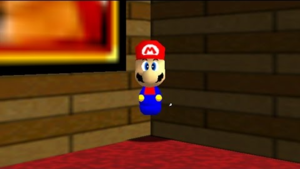 Mario in a misalignment[1] 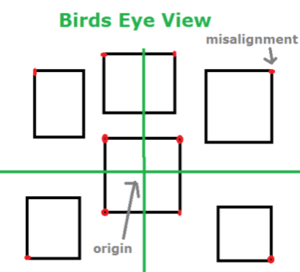 A Misalignment is a 1x1-unit area a floor hitbox extends to but wall hitboxes do not. On convex corners, they allow Mario to snap up to the floor from up to 78 units below it, as opposed to just 30 units when there is a wall hitbox present.

It is the same truncation responsible for Parallel Universes that causes misalignment; because floor and ceiling detection is done with integers, all decimal places are removed. If Mario has the right position off the floor, his position will be rounded to a spot on the floor, making the floor appear to extend to his actual position. Walls do not do this, since they use floating-point numbers, which causes the floor to not properly align with its adjacent walls.

Because they allow lower jumps to reach ledges and cancel air actions immediately, they are useful for saving time in TASes regardless of their demanded precision.

Because of the extra height they allow Mario to gain and the ability to get directly under the floor, they're very useful in the A button challenge. They also require almost no setup or allow less setup than otherwise, which makes them the preferred method over many other ABC strats. Uses include: