From Ukikipedia
(Redirected from Clone)
Jump to navigation Jump to search 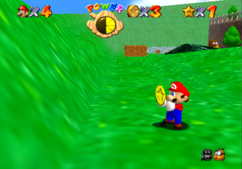 Cloning refers to a number of glitches that allow Mario to hold objects that were not intended to be held. Typically, this happens when Mario continues to hold an object slot after the object in it has unloaded. When a new object loads into this slot, Mario will hold a reference to this new object. The name "cloning" comes from one of its main applications, which is to duplicate objects such as coins or goombas. This name is a misnomer, as the duplication behavior is a property of those specific objects, and not the technique itself.

When Mario picks up an object by punching (as opposed to diving or water grabbing), there is a two-frame window of time in which the object is not placed into limbo, yet Mario has committed to picking up the object. At the end of this window, Mario will hold the object slot that this object is in, even if the original object has since unloaded.

For example, if Mario begins to pick up a Bob-omb just before it explodes and unloads, Mario will hold the object slot that the Bob-omb originally occupied.

This can be performed using the following objects:[1]

Loading zones cause all objects to unload, and new objects to spawn in their place. If Mario is holding an object while passing through a loading zone, he will continue to hold the object slot, even though the object has unloaded.

This can be performed in Wet-Dry World by carrying a chuckya or Heave-Ho through the loading zone, and in Dire, Dire Docks using the water shell holding glitch.

The term "clone" generally refers to an object that was not meant to be held that nevertheless is or was being held by Mario.

When Mario releases a clone, it stops updating and becomes unable to send signals to other objects. Mario can still interact with it, since interaction is part of Mario's behavior, not the object's. For example, while Mario can still collect a coin after it has been cloned, the coin no longer spins.

Though Mario can still interact with objects, certain types of interactions will cause the object to become intangible, and thus he will no longer be able to interact with it in any way. These include:

Some notable interactions that do not cause the object to become intangible are:

The behavior of clones is identical to that of objects during Time Stop. If an object that is meant to be held, like a Bob-omb or cork box, is cloned, it will act normally when released. It is not usually considered a clone and has behavior separate from its behavior during time stop.

Some objects such as coins and Goombas use spawners, whose purpose is to ensure that these objects are loaded when necessary. For example, when Mario moves far away from a line of coins, they unload. When Mario again moves toward the coins, the coin line's spawner is responsible for respawning the coins, and only those coins, in the line that have not yet been collected.

When Mario interacts with a coin, he collects it and sets a flag on the coin spawner to inform it that it has been collected. When the coin next updates, it despawns itself and informs the coin spawner that it should not be respawned when Mario moves away and comes back. However, if this coin was cloned, then it does not update, and so cannot inform the spawner that it has been collected. Thus, if Mario collects a cloned coin, and then moves away and returns, the original coin will respawn, effectively duplicating the coin. This does not occur with coins that do not come from spawners, as they cannot load during the level.

The following objects can be duplicated in this manner:

Because cloned objects never unload, they gradually fill up the available object slots and continue to be rendered on screen. This can cause lag, game corruption, and eventually a game freeze when the object slots run out.

When Mario rides on a Koopa Shell or Shiny Shell, although the latter is impossible to clone, the shell object stays spawned until he runs into a wall or presses Z, which causes the shell to break. At this point, Mario sets a flag on the shell, and when the shell next updates, it unloads itself. Because a cloned shell does not update, it does not unload, allowing Mario to repeatedly ride and break a shell after cloning it.

Stars that spawn during the course of gameplay can be cloned. For example, this can be done with red coin stars, 100 coin stars, and stars contained in item boxes. Even if a star is spawned at the start of a level, it can still be cloned if that level contains a loading zone, such as Board Bowser's Sub and Collect the Caps in Dire, Dire Docks.

These are commonly used methods to get Mario to hold the correct object slot to clone a desired object.

A premature clone is a cloned object that has some of its properties not fully loaded yet. This occurs on the first frame a nearby spawner spawns objects that can be cloned, and on that frame, the object would temporarily be placed at the origin of the course (0, 0, 0) while many of the properties are missing.

A clone of such an object mimics many of the same traits. Therefore, a premature clone would, if released, be placed at the origin of the course while missing some effects. For example, a coin released prematurely will not be collected while the object is released, unlike the standard steps of cloning a coin. Using this technique, Pannenkoek2012 could complete some stages without collecting any coins where it may seem inevitable, notably in Mario Wings to the Sky.