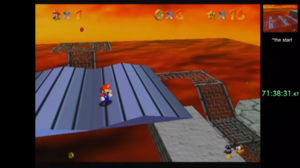 Stream by Switchpalacecorner, after 71.5 hours of raising in Wii Virtual Console 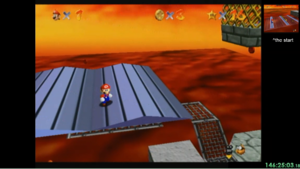 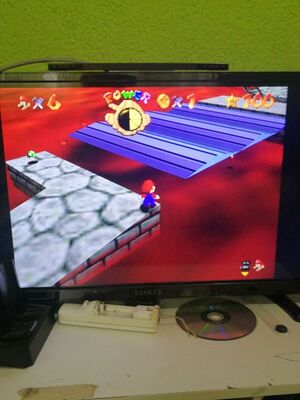 The original BitFS platform raising discovery by Andru! on May 10th 2018.

Wii VC Round-to-Zero refers to an emulation inaccuracy in the Wii Virtual Console (Wii VC) version of SM64. When converting a double precision floating point number (a "double") to a single precision floating point number (a "float"), the N64 typically uses the round-to-nearest rounding mode. This means that if the double is not exactly equal to a float, it will round up or down to the float that is closest in value to the original number. While this behavior is accurately emulated by most emulators and the Wii U VC, the SM64 Wii VC instead uses the round-to-zero mode. This mode will always round the double up if it is negative, and round it down if it is positive.

While the programmers did not intentionally use doubles very often, favoring single precision floats instead, they occasionally used them accidentally.

In the above code sample, y and sins(t) are both single precision floats. However, in C, the numeric literal 0.58 is a double since it lacks a trailing f, as in 0.58f. This causes the expression to evaluate to a double, which is then converted to a float before being stored in y. Examples such as this one arise in many places in the game's source code, and over time they result in large discrepancies between the N64 and Wii VC versions of the game. For this reason, TASes produced for one of these platforms cannot generally be played back on the other without desync.

The example given above is taken from the code controlling the oscillation of the platforms at the beginning of Bowser in the Fire Sea. Using the N64's rounding mode, the y variable, which represents the platform's height, will repeatedly return to its original value and continue oscillating with fixed maximum height. Even though each double to single conversion produces a small amount of error, this error balances out over the course of the platform's cycle. On the Wii VC, however, the error always accumulates in the same direction (upward if the platform is below y = 0, and downward if the platform is above y = 0), and so the platform slowly drifts in the vertical direction. This is known as Wii VC platform drift.

: the platform suddenly slows down quickly, then at a slower rate before it decelerates faster again, and finally, suddenly the platform's acceleration completely stops, the speed settling at a constant, half of what it started with.

The platforms at the beginning of the level are below y = 0, and so they gradually rise upward. Over the course of several days, they are high enough they can be used to reach the elevator past the pole, which previously required one A press to get past. It takes eight days for the platform to reach high enough for a dive recover to land in the elevator shaft, but using VSC with a lava boost requires only three days.

The glitch was discovered by xAndru! when he left his Wii powered on overnight while in Bowser in the Fire Sea and noticed that the oscillating platforms had risen above their original positions.[1]

The bug does not occur in any later Wii VC releases, nor in the Wii U VC or in any mainstream N64 emulators. At the time of its discovery, the bug did not occur on the Dolphin emulator, but has since been corrected.[2]

No objects other than the sinking platforms are known to have similarly exploitable behavior, though the rounding bug does cause many discrepancies between the original and Wii VC versions of the game, including slightly different surface normals.

After several failed attempts by various players, the A press save in Bowser in the Fire Sea was console verified RTA on 20 Jun 2018 by Emilia Blue.[3] Six days later, pannenkoek2012 TASed the red coin star in zero A presses using a modified N64 emulator that replicated the rounding error.[4]