Tower of the Wing Cap

From Ukikipedia
(Redirected from TotWC)
Jump to navigation Jump to search

For a tutorial on speedrunning the corresponding star, see the Wing Cap RTA Guide

The Tower of the Wing Cap or TotWC is a secret stage where you unlock the Wing Cap. It is accessible after collecting 10 stars; a bright light shines on the sun mat in the foyer, and looking at the source with the C-Up button sends you to TotWC. 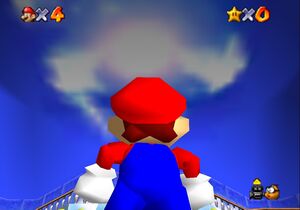 The ceiling of the castle foyer as viewed with C^ from the central sun carpet. Looking at this spot with 10 or more stars warps you into the level.

Collecting all of the coins in this course is deceptively difficult, and was at one point thought to be impossible due to the difficult maneuvering. There's a total of 63 coins here.