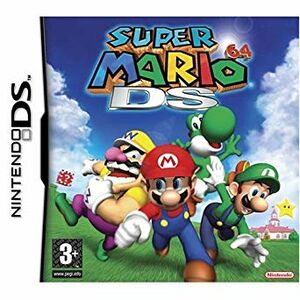 The image on the box of the game

Super Mario 64 DS or SM64DS is a remake of Super Mario 64 on the DS console. It includes new stars, new areas, and new playable characters. The entire game was remade from scratch, and more content was added. For this reason, it is not considered to be a different version of Super Mario 64, but rather a full recreation.

SM64DS has 4 playable characters: Yoshi, Mario, Luigi, and Wario. You start the game with Yoshi, and need to collect 8 stars to unlock Mario in "Goomboss Battle". After getting 15 stars, Big Boo's Haunt is unlocked, where the player can rescue Luigi. Then after beating the second Bowser, you can use Luigi to go through the mirror in the mirror room upstairs and unlock Wario.


The room behind the 1 star door leading to PSS has been completely modified. It now contains the door to unlock each characters as well as a door that unlocks a star after catching 8 glowing rabbits. But also it leads to a new room where you can play minigames, and access a secret level called "Sunshine Isles". This level contains 5 silver stars and a nice Sunshine music plays. In this minigame room, you can access another room that leads to Goomboss Battle after 8 stars.

The Character Room, including the entrance to PSS, to Sunshine Isles, and to Goomboss Battle.

In the courtyard, there is a secret stage called "The Battlefort", that leads to a level where you have to collect 5 silver stars.


In BBH, there is a new painting that leads to Big Boo Battle. This stage is a maze.


In the SL room, you can go through the mirror with Luigi to get a secret star and access Chief Chilly Challenge.


In SL, the igloo has been remade. Instead of a maze, the red coin star is located inside.

In Goomboss Battle, there is a Big Goomba at the end of the level that you must beat by throwing eggs or goombas at him. He will give you the Key to unlock Mario.


In Big Boo Battle, there is King Boo at the end of the level that you must beat. He can turn invisible. He will give you the key to unlock the Luigi Door.


In Chief Chilly Challenge, there is an Ice Bully at the end of the level that you must beat. The stage collapses after you hit him. He will give you the key to unlock the Wario Door.

New Stars in the 15 levels