Shoshinkai (later Spaceworld) was an event held by Nintendo to debut new games and technology on which they were working. The event was held from November 22-24 in a small town outside of Tokyo. Shoshinkai 1995 is particularly relevant to Mario 64, as this event featured beta footage/gameplay of the game. Significant portions of the game are different from the final version since the game was an estimated 50% complete at the time.

Hud numbers/symbols, unfortunately not clear due to quality of sources

Various iterations of the health meter

At various times during the demo, a mini-map comes down from the top in the upper-right corner. The map gives an overhead view to help guide the player, it is unclear if the map comes down on its own or is controlled by the player. 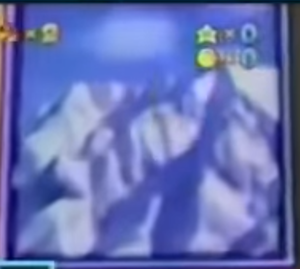