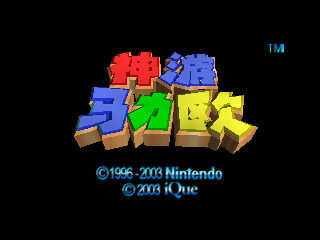 The iQue version of Super Mario 64 is the only official release of SM64 in China, released for the iQue Player (IQP) console on November 17, 2003. It came as a time-limited demo on all IQPs, and was able to be bought as a full game.

Other than the Chinese language support, the iQue version has several other interesting IQP-related changes from the Shindou version it was based off of.

Graphics become corrupted on the IQP if the 13th bit of VI_CONTROL_REG is set, which it is by default on most (if not all) N64 games. This may have been an intentional protection against piracy or ROM injection.

The IQP does not have EEPROM, which is used to save data such as save file status in the N64 versions. Instead it has a removable flash cartridge in the back of the console. Save file operations in IQP games are simulated by reading from/writing to a special location in RAM, which is copied to the flash cartridge when the game is closed. The IQP OS functions have been modified to support this.