From Ukikipedia
(Redirected from J 1.0)
Jump to navigation Jump to search 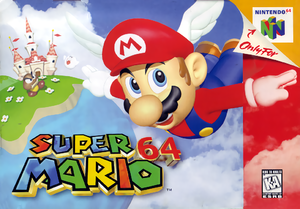 Super Mario 64 is a 1996 platforming game on the Nintendo 64 console. It was a launch title for the N64 (along with Pilotwings 64 and Cruis'n USA in Europe), and is largely considered to be one of the most important 3D platformers of all time.

Super Mario 64 started development sometime before 1995. The first time Super Mario 64 was shown was at the Shoshinkai show in November of 1995, with the introduction of the Nintendo 64 (Ultra 64 at the time). Early footage of the show revealed the 50% complete beta version of Super Mario 64, in which it looked completely different than what the final product looked like.[1] The final product was supposed to come out in December, but it was delayed further, and the entire game was rebuilt. On May 16th, 1996 (E3 1996) the game was shown off and is almost like the final game.[2] The entire game was almost accessible, some details got changed before the release, such as the different star icon in the HUD, a rock spike at the top of the mountain in Bob-omb Battlefield, and other small details that were changed. The game was rushed at the end of development as told by one of the programmers of Super Mario 64, and a couple of the team members never wanted to make games anymore due to being burnt out after working on Super Mario 64.[3] The game was released in Japan on June 23rd 1996, then on September 29th, 1996 in North America, and finally on March 1st, 1997 in Europe.

There are many different versions of the game, differing by where, when, how, and in what way they were released.

The Nintendo 64 console is less robust than modern consoles, so its CPU is more likely to crash when confronted by errors and other unforeseen occurrences.

The very first version of the game to be commercially released, the Japanese N64 version was succeeded by the Shindou version a year after release. The Japanese version has a few glitches that were later fixed in all other versions, such as spawning displacement, the lack of a coin limit, time stop and others. It is also notable for being the fastest version of the game for the 1 Key category (and some others). This is because the text takes longer, but the lack of narration makes the game shorter. The text in the first Bowser fight is avoided during the 1 Key run, so the Japanese version becomes faster.

The English version and all successive versions added some extra dialogue over the Japanese version. For example, Mario does not say "Haha", and Peach does not narrate her "Dear Mario" letter. In addition, she does not talk during the ending. It fixes some errors and glitches from the previous version, such as the lack of a coin limit. It has, in general, less text than the Japanese version, but takes longer during the intro and ending due to Peach's narration.

The European release of Super Mario 64 supports language changing in the settings menu between English, French, and German. This is optimal for the ABZ Button Challenge because the Start button can be used to change language and the language with the least text can be selected. Due to Wii VC Round-To-Zero, however, the true optimal PAL version is not on N64. Outside of ABZ, PAL is little-used because changing languages wastes time and English is effectively identical if you do not change languages. Because of the PAL video format using 50hz instead of NTSC's 60hz, PAL runs at 25 frames per second rather than 30, another reason why it is suboptimal for speedruns/TASes.

The final release of Super Mario 64 on the Nintendo 64 was once again released in Japanese. It enabled a compiler flag to allow optimizations, which results in less lag. It also fixed the infamous Backwards Long Jump glitch, which is why it is rarely used in speedruns, except in the BLJless category. Strangely, when grabbing a pole on this version, horizontal speed affects Mario's angle. The game introduced new voice clips like "Bye, bye!" when throwing Bowser. Some of Mario's voice clips are high-pitched in this version. This version would later be used for Super Mario 3D All-Stars.

The iQue version of the game runs on the iQue Player, a rare handheld N64 variant only released in China. The iQue version is in fact the Shindou version translated to Chinese, and as such it does not have BLJs or the Bob-omb or Bully angle crashes. By hacking a romhack by Kaze onto an iQue, it was found that the camera going to a Parallel Universe does crash the game like on the N64 console.[4]

Super Mario 64 DD Version or SM64DD (called Super Mario Disk Version on the title screen) was an unreleased version of the game for the 64DD, likely made to test the load times of the system. The 64DD was a commercial failure, and the DD version was never released. Only one known copy of this version exists, owned by adonfjv, who found it at a Japanese video game store in 2014[5]. The ROM (NDD) of this version has since been dumped.

SM64DD is effectively the Japanese version of SM64 ported to the 64DD, with most (but not all) sounds replaced with their PAL versions. For example, the red coin and the sliding star door sounds are the same as in the Japanese release. The title screen is vastly different, resembling the hidden debug mode's level select screen. Since it is on a disk, load times are increased.

The most major difference is that entering the inside of the island in Tiny-Huge Island, where Wiggler and red coins reside, will crash the game. This makes collecting all 120 stars impossible on this version. The crash is console only, and occurs due to Wiggler's health value being uninitialized (the original Japanese and USA releases do not crash from this programming oversight as a coincidence).

The Wii acts differently from the N64. It is much less likely to crash. Unlike the N64, it does not crash from PU crashes, Bully angle crash, or Bob-omb angle crash. The emulation software also rounds floats differently from other consoles. Another difference is that it does not crash from the Address Error Exception. It is currently unknown whether the Wii crashes upon having infinity speed.

Japanese Wii VC is actually the Shindou edition, not the original Japanese version. This is why it does not have spawning displacement or other Japanese N64-exclusive glitches, nor does it have BLJs. It is almost never used for speedrunning for that reason.

English Wii VC is the optimal Wii VC for speedruns. It avoids the lack of BLJs in the Japanese version and the slower framerate of the PAL version. It is used for the A Button Challenge any% run because Bowser in the Fire Sea takes 0 A presses instead of 1 due to a rounding error.

PAL Wii VC is rarely seen because it is obscure and slow. However, it is actually the ideal game version for the ABZ Button Challenge, at least for any%, because it contains both language switching and the rounding error in BitFS.

The Wii U Virtual Console version has no known interesting glitches that set it apart from either N64 or Wii VC. It is identical to Wii VC, except that the rounding error is absent. Like Wii VC, it ignores Address Error Exceptions. Wii U VC is often joked by speedrunners for have a high amount of input lag and it is mostly used only by new runners.

Also like Wii VC, American Wii U VC is the US version.

PAL Wii U VC is actually the US version (unlike on Wii VC), so it's identical to the US Wii U VC.[6]

Super Mario 3D All-Stars includes an upscaled Super Mario 64. The version is the Shindou version with Lua scripts to hack in English text, new upscaled textures, and slight changes to accommodate the Switch control scheme (for example, "PRESS +" on the Mario head screen instead of "PRESS START").[7] The Switch does not have the Wii's rounding error, but it does ignore Address Error Exceptions.