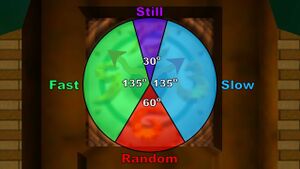 There are no A presses needed inside TTC in the A Button Challenge.