When you grab an object, the object isn't actually in your hands, it's invisible and not in its normal state. The object is in a state known as being "in limbo". When you throw or drop the object, it exits limbo and appears at the HOLP.

This term has caused some confusion because the object is not actually moved to another location. It is just made invisible and (in most cases) doesn't interact with any other objects or Mario.

Super Mario 64's grabbing behavior is similar to a coatroom. When Mario grabs an object, he drops it off in the coatroom (limbo) and is given a ticket (the visible entity that appears in Mario's hands). When he releases that object later, he redeems the ticket, losing it, to receive the original item (the coat). Cloning allows Mario to have the ticket for a coat that is not in the coatroom, causing odd behavior upon redeeming it if it is not a coat (not a grabbable item). Handsfree Teleporting allows Mario to get rid of a ticket without the object leaving limbo, as though he lost his ticket and cannot get his coat back.

The moving grab, dive, water grab, heavy grab, and Bowser grab act instantly. The standing grab places objects into limbo 2 frames after updating Mario's held object variable. This allows objects to be grabbed fake. Since fake objects have been unloaded, they are not in limbo.

Objects in limbo are made invisible, but are still rendered. They are still not visible on screen, so this is indistinguishable from just not being rendered. Strangely, Bowser stays visible but is not rendered, which is effectively the same. The ticket is visible instead of the object and looks like the object; however, the ticket is not an object. 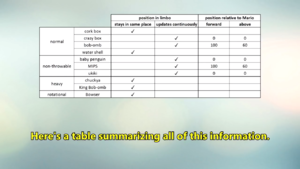 How objects act in limbo

All grabbable objects except Bob-ombs, Crazy Boxes, and special grabs like Ukiki, MIPS, and Baby Penguin (both the real baby and the false baby) do not update while in limbo, similarly to clones, which is intended to stop objects like Cork Boxes from unloading and Bob-ombs from exploding without being dropped[1]. This also means that they are intangible and stay in place where they were grabbed. Those objects that do update constantly set their position to Mario's position, displaced by the values in the table to the right.

Bob-ombs in limbo constantly produce Smoke, which thus comes from the real Bob-omb and not the ticket. The real Bob-omb will never explode, but can be grabbed if Mario holds it handsfree, which is necessary because it is impossible to grab while holding an object normally.

Since a Bloated Bob-omb is larger than normal Bob-ombs, it is big enough to infringe on Mario's hitbox, and he is pushed backwards to avoid ending the frame inside its hitbox. Since it constantly updates to be in front of him, it moves with him. Then, he is inside its hitbox again next frame. This explains the constant backwards momentum that Mario receives from bloated Bob-ombs. Although fake Bob-ombs start out looking identical to bloated Bob-ombs, Mario does not receive momentum from them because they are not in limbo and are therefore not in front of him. They are unloaded and thus have no position.

The HOLP is the position at which the ticket was last rendered. Thus, it is slightly offset from Mario's position and doesn't update if Mario holds an invisible clone or has Hat in Hand active.