Difference between revisions of "Instant Release"

From Ukikipedia
Jump to: navigation, search 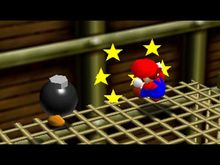 Instant Release refers to techniques in which a held object is released instantly. This allows such objects to appear at the HOLP without updating it. An example of an IR is diving into a wall and a Bob-omb on the same frame, causing the Bob-omb to be released before the HOLP can update, as demonstrated in "SM64 - Stomp on the Thwomp - 6x A Presses". Then, it will stay at the HOLP until Mario enters whatever object he teleported`s activation radius.